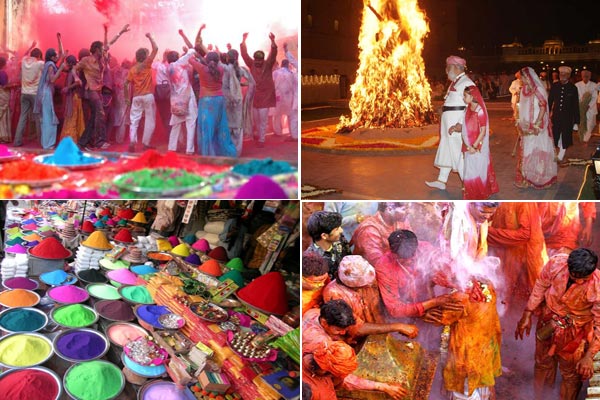 New Delhi : Holi – the festival of colors – is undoubtedly the most fun-filled and boisterous of Hindu festival. It’s an occasion that brings in unadulterated joy and mirth, fun and play, music and dance, and, of course, lots of bright colors.

Holi the festival of colour, music and happiness, is a time to let go of all else and just bask in the wondrous colours of this world.

Holi is essentially the celebration of various legends associated with the it. As per northern India mythology the word Holi originated from “Holika”, sister of Hiranyakashipu.

The festival of Holi is celebrated because of a story in the old Hindu religion. In Vaishnavism, Hiranyakashipu is the great king of demons, and he had been granted a boon by Brahma, which made it almost impossible for him to be killed.

The boon was due to his long penance, after which he had demanded that he not be killed “during day or night; inside the home or outside, not on earth or in the sky; neither by a man nor an animal; neither by astra nor by shastra”.

Consequently, he grew arrogant and attacked the Heavens and the Earth. He demanded that people stop worshipping Gods and start praising respectfully to him.

Hiranyakashipu, on the lap, being killed by Narasimha, an incarnation of Vishnu According to this belief, Hiranyakashipu’s own son, Prahlada, was a devotee of Vishnu.

In spite of several threats from Hiranyakashipu, Prahlada continued offering prayers to Vishnu.

He was poisoned by Hiranyakashipu, but the poison turned to nectar in his mouth. He was ordered to be trampled by elephants yet remained unharmed.

He was put in a room with hungry, poisonous snakes and survived.

All of Hiranyakashipu’s attempts to kill his son failed. Finally, he ordered young Prahlada to sit on a pyre in the lap of Holika, Hiranyakashipu’s demoness sister, who also could not die because she had a boon preventing her from being burned by fire.

Prahlada readily accepted his father’s orders, and prayed to Lord Vishnu to keep him safe.

When the fire started, everyone watched in amazement as Holika burnt to death, while Prahlada survived unharmed.

The salvation of Prahlada and burning of Holika is celebrated as Holi.

It also celebrates the legend of Radha and Krishna which describes the extreme delight, Krishna took in applying colour on Radha and other gopis.

This prank of Krishna later, became a trend and a part of the Holi festivities.

Mythology also states that Holi is the celebration of death of Ogress Pootana who tried to kill infant, Krishna by feeding poisonous milk to it.

As per Southern India mythology Lord Shiva and Kaamadeva are the legends of Holi.

People in south celebrate the sacrifice of Lord of Passion Kaamadeva who risked his life to revoke Lord Shiva from meditation and save the world.

Also, popular is the legend of Ogress Dhundhi who used to trouble children in the kingdom of Raghu and was ultimately chased away by the pranks of the children on the day of Holi.

Showing their belief in the legend, children till date play pranks and hurl abuses at the time of Holika Dahan.

Unlike all the other festivals of India, Holi is one such festival where one can put down the social taboos and indulge in the intoxicating drinks and sweets prepared by using opium.

It is a festival of romance often represented by the love-play of Radha and Krishna. Brij Holi is famous all over the world for its gaiety in spirit.

Each year, young and old, men and women, all indulge themselves in the spirit of colors and for once forget the social taboos.

There are mouthwatering delicacies to savor such as ‘Gujhias’ and ‘Papris’ and there are interesting traditions and customs of Holi that have their own regional variances.