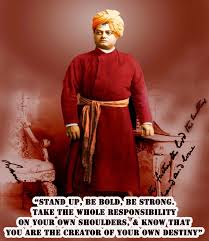 India is celebrating the 150 birth anniversary of Swami Vivekananda, one of the greatest exponents of Hinduism, the bridge between the philosophy of east and philosophy of west and also between Hinduism and Buddhism. According to sister Nivedita, Swamiji’s first act after taking Sannyas was to “hurry to Bodh Gaya, and sit under the great tree”; and that his last journey, too, had taken him to Bodh Gaya.

On 7th January 2014, His Holiness the 14th Dalai Lama will unveil a 7 feet 9 inches tall “Makrana” white marble statue of Vivekananda during his one day visit to Coimbatore. The Dalai Lama is an admirer of Vivekananda and once even commented on him “He had great foresight and I feel I am a follower, trying to implement his dream of creating inter-religious harmony in the world.”

There are many similarities between these two great Yogis. One calls himself a wandering monk and another as a simple Buddhist monks. Both are sanyasins, both are patriotic, one trying to wake India against British raj and another trying to struggle against the Han Chinese chauvinism in Tibet. Swami Vivekananda said “ The old religions said that he was an atheist who did not believe in God. The new religion says that he is the atheist who does not believe in himself.” The Dalai Lama says “This is my simple religion. No need for temples. No need for complicated philosophy. Your own mind, your own heart is the temple. Your philosophy is simple kindness”. Both stress on education based on ethics or character building and inter religious harmony. Both address the gatherings as “My sisters and brothers” and both have played a vital role in presenting the west the wisdom of east.

Referring to eating habit of the Dalai Lama which some Hindu spiritual leaders make the main cause of difference between Hindus and Buddhism, both the teachers’ explanations are almost similar and practical. Both believes that killing animals purposely for oneself should not be encouraged but if your health demands, one can eat. Both being sanyasis believe in the fact that normally they do not have a choice as they have to eat anything that they are offered. Swami Vivekananda further says “The Brâhmin of Southern India, for instance, would shrink in horror at the sight of another Brahmin eating meat; a Brahmin in the North thinks it a most glorious and holy thing to do — he kills goats by the hundred in sacrifice. If you put forward your custom, they are equally ready with theirs. Various are the customs all over India, but they are local. The greatest mistake made is that ignorant people always think that this local custom is the essence of our religion.” However, institutions of these two great masters today such as the Ramakrishna Mission and the Tibetans monasteries and nunneries in exile in India are all vegetarians.

In 2001 when the Dalai Lama was invited officially for the first time to visit Khumbmela, the Hindu Festival of the ‘nectar of immortality’ at the bank of river Ganges in Allahabad, I was in Delhi where I noticed, during a meeting of few of Tibet’s long time Indian friends who were visibly dismayed and expressed shock. These ‘secular’ friends said “ No, No, His Holiness should never accept the invitation. He will be misused by the Hindu fundamentalists”. They even wrote to His Holiness expressing their anxiety and anger. One of the mainstream newspaper ‘The Hindu’ in January 29th, 2001, editorials wrote” The involvement of the Tibetan religious leader, the Dalai Lama, in activities sponsored by the Vishwa Hindu Parishad at the Kumbh Mela in Allahabad has attracted sharp criticism from a section of the Hindu religious leaders. The Kumbh was an event related to the faith of “Sanatan Dharma” and Buddhism had basic differences with its tenets”. Some Hindu religious leaders also made certain remarks about the eating practices of the Tibetan leader which, they said, “did not conform to the Hindu practices.” His Holiness not only visited the Khumbmela but also did an ‘arti’ with one of the most learned spiritual leader Shankaracharya of Kanchi and Swami Chidananda Saraswati (Muniji)

Sandra Anderson writes in “The Khumbmela Times” “ His Holiness the Dalai Lama walked through the tens of thousands in the lecture hall to the stage hand in hand with Pandit Rajmani and Swami Avadheshananda Giri. Accompanying them were the respected Ashok Singhal and B.K. Modi, implying that 700 million Hindus were also walking with His Holiness the Dalai Lama. The host of accompanying Maha Mandaleshwaras silently confirmed that in the realm of spirituality all of us are one and the same. Differences lie only in the narrow and near-sighted sectarian view.”

Swami Avadheshananda Giri, who greeted the Dalai Lama is also an Acharya Maha Mandaleshvara who teaches thousands of swamis, and millions of devotees. He stressed the importance of bringing Hinduism and Buddhism together, and stated that both traditions have their roots in the same soil. He said “Today the leaders of both denominations need to embrace each other and guide their followers on the path of love, compassion, mutual understanding and tolerance.”

His Holiness the Dalai Lama said “Hinduism and Buddhism are like twin brothers. They came out of the same Arya Bhumi –the land of noble sages. Among the ignorant in both groups there has been a great deal of misunderstanding. People think that Hindus and Buddhists for centuries have opposed each other. Such people cite the philosophical debates that took place between the great teachers of these two traditions. Those debates centuries ago in fact enabled the philosophers, religious leaders, and seekers to find the best of the best hidden in both traditions, so that they could embrace the gems and throw away the trash. The great Buddhist masters such as Nagarjuna, Asanga, Dingnaga, and Chandrakirti are like shining stars. The masters from the Vedic tradition such as Shankaracharya, Ramanuja, and Madhushudana held debates with the purpose of learning from each other” When His Holiness said “This revered land (India) and the masters of this land are our teachers and we are the disciples.” Sandra writes “At this comment, I looked at the audience, and I was moved to see the tears of love and respect in the eyes of thousands of Hindus.”

Swami Vivekanada had said ” A true Hindu is a true Buddhist and a true Buddhist is a true Hindu” but mark the word true. The visit of Khumbmela by the Dalai Lama was in a way the beginning of coming together of the India’s two great spiritual traditions so that both Buddhism and Hinduism can flourish side by side in the land of its birth. Following that visit there are regular interactions in private and publicly sharing the platform with many respected Hindu spiritual leaders such as Sri Sri Ravi Shankar ji , Swami Prakasananda of Sree Narayan Dharma Sanghom trust, Dada J.P,Vaswani and paying respect to 105 year old Swami Shivakumara ji and many other spiritual masters.

After the death of the last Buddhist emperor of India Raja Harshvardhan and advent of Adi Shankara in 800 AD, who polemicized against Buddhism and as a result when Buddhism almost disappeared from the place of its birth, under the patronage of King Trisong Detsen of Tibet in the 7th century, a wave of great Buddhist teachers traveled to Tibet from India. Incomparable masters such as Padmasambhava, Vairocana, Santaraksita and Vimalamitra spread the dharma throughout Tibet. For centuries, Tibetans have zealously preserved the spiritual wealth of India. Today, His Holiness the Dalai Lama and many Tibetan spiritual masters of four schools of Buddhism in exile in India and the west are the repository of this ancient tradition called Nalanda tradition or Tibetan Buddhism. His Holiness the Dalai Lama has relinquished his political and administrative powers and it is surely a good sign that India finally starts looking at the Dalai Lama from a narrow view point of being a Tibetan leader to a universal spiritual master who can make significant influence to the 550 millions of followers of all schools of Buddhism all over the world.