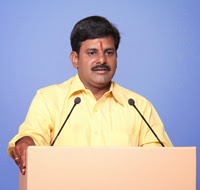 Bhagyanagar (Hyderabad) : An ancient temple of Shri Dnyan Saraswati Devi exists on the bank of river Godavari at Basar in the district Adilabad of Telangana State. Pushkarani fair is held every year at the temple. However, the condition of the Ghats, river-bed and temples on the bank of the river are in a very pitiable state. Due to a large quantity of garbage accumulated in the river-bed, devotees find it very difficult to take ritualistic auspicious bath. A devout Hindu Mr. K.V. Ramana Murthy highlighted these problems by writing a letter in a local newspaper and attracted the attention of the Government.

The Endowment Minister Indrakaran Reddy reviewed Godavari Pushkaram arrangements in the meeting held in secretariat on 7th March. He said construction of all Pushkar Ghats would be completed by the end of May. In view of Pushkaram, Rs. 11.37 Crores would be released for the repairs of 47 temples. He further assured 66 Ghats would be repaired, and 14 more Ghats will be constructed, permission for which was sought from the Government. He told all arrangements were in full swing for the Pushkarams.