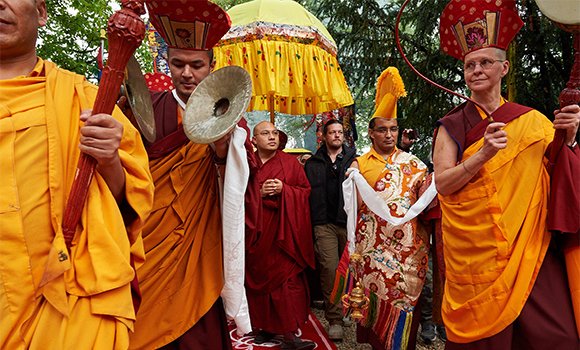 June 1, 2016 – Paris, France
Kagyu Dzong, a center under the guidance of Lama Gyurme in Paris, is situated in the broad meadows and spreading forests of the Bois de Vincennes. Though the center of Paris is not far away, one has the impression of having taken a trip into the countryside. In front of the temple building, a traditional welcoming gate had been constructed for the Karmapa’s visit, and the path leading inside was lined with tall victory banners, colorful Tibetan flags, and over one hundred followers to welcome him.

The Karmapa walked the tree-line path slowly, stopping to greet people on his way. Once in the shrine room, he lit a butter lamp in front of an old Buddha statue on the main shrine and took his seat on the central throne. Joining him in the temple were Ringu Tulku (President of Karmapa Foundation Europe), Lama Gyurme, a lama representing the Drukpa Kagyu tradition plus other Tibetan lamas, Tsering Dondrup (representative of the Tibetans in France), and three-year retreatants as well as many members of the center. Lama Gyurme led the mandala offering to the Karmapa, and his disciples followed with the classic representations of body, speech, mind, qualities, and activity.

Following rice and tea for everyone, President of the Center, Monsieur Heurtaux, gave a heartfelt welcoming address. He recalled that the Sixteen Karmapa had visited the center and expressed his great happiness at being able to receive his successor, the Seventeenth Karmapa, Ogyen Trinley Dorje. The President narrated a brief history of the Seventeenth Karmapa, how he had been found through a letter of prediction written by the previous Karmapa and given to Situ Rinpoche, down through the Karmapa’s enthronement, escape to India, education, and travels abroad. The President also spoke of His Holiness’ support of women’s rights and his great concern for the environment. Praising him as a brilliant and radiant lama of the twenty-first century, M. Heurtaux concluded with thanks to the Karmapa for blessing the center and supplicated him to live a very long life and to return to France many times.

The Karmapa responded that it was a joy to be here at the center and warmly welcomed everyone. The fact that the Sixteenth Karmapa had been here, he said, was especially auspicious and mentioned that he takes the Sixteenth Karmapa’s life story as a model for his own life. During a first visit, the feeling one has is important, he said, and his experience was one of joy and delight to be here. He was glad to have the chance to meet people and hoped to return often in the future. The meeting came to a close with the supplication to accomplish the aspirations of all the buddhas. After a fine meal prepared in the center’s kitchen, the Karmapa walked back down the pathway to his car and departed for a visit to the Vietnamese temple south of Paris.