Yogeshwar/Shiva,  the lord of yogis, is commonly known throughout the world, but the five faced Shiva and associated teachings remains somewhat a mystery to students of spirituality.  While the teachings regarding the five faces are somewhat expansive, there is a great deal one can learn from the five faces as they contain numerous lessons and fulfill an important role within ones spiritual practice.   Initially, Shiva’s five faces can be associated with many groupings of five such as the five elements, the five koshas (sheaths that surround the soul) and the first five chakras.

The 5 faces of Shiva: 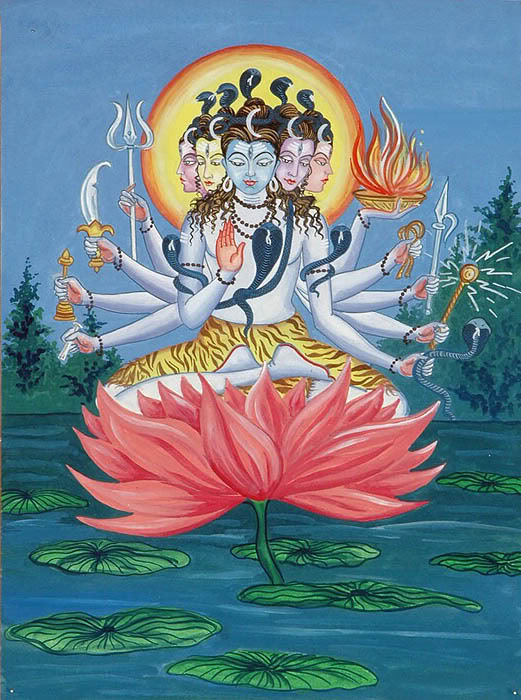 Tatpurusha is the eastern face.  This face represents the parātman or supreme soul behind the physical being.  This form is Ānānda Shaktī, the power of bliss.  Connected with the Annamaya kosha, tatpurusha in its higher manifestation is bliss; in the lower manifestation it is the concealing power of Shiva.  This face is associated with the earth element, muladhara chakra and is considered beneficial for increasing focus.

Īshāna is the upper or skyward face. It is the Citta Shaktī or power of the individual consciousness to realize the universal consciousness.  This form is associated with Akasha or ether, and the Vishuddha chakra.  This is the total energy of Shiva encompassing all attributes of Shiva.  This is the face of Shiva that is the revealing power and is associated with the Anandamaya kosha.

While one can benefit from chanting mantra to all the faces prior to beginning one’s sadhana, meditation or other spiritual activity, it is important to note that there is an astrological aspect as well.  As each of us has a karmic disposition to one face over the other in regard to particular karmas within this lifetime.  This would be determined by consulting ones Vedic astrological chart.  Once determined, one can meditate or perform mantra to that particular face in an attempt to find relief or balance within the specific afflicted area of one’s life.