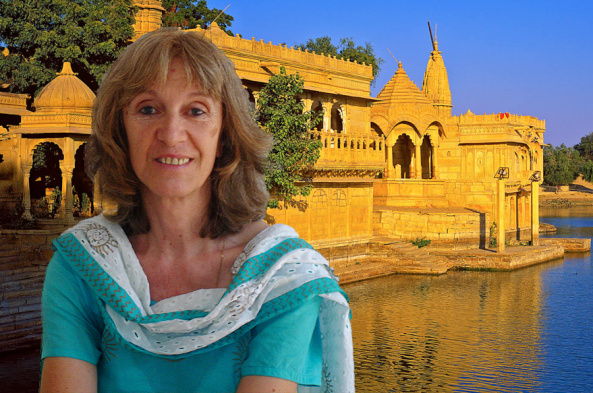 Whenever news about India make it to the local Nuremberg newspaper, my mother reads them out to me on phone. Usually, those news portray India in a poor light, like ‘people died from cold on the streets of Delhi’ or, especially in the past year ever so often, ‘another gang rape’, conveniently ignoring the gang rapes on home turf. During recent months, however, one term clearly dominates the western media, and going by the language used, it seems to be the most dangerous and heinous trait that any Indian could have, and that needs to be condemned by one and all.  The term is “Hindu fundamentalist”.  And the prime ministerial candidate Narendra Modi, who is considered the frontrunner in the elections, is said to be one.

“A racist is India’s hope – Hindu fundamentalist Modi could win the election” my mother read out to me on 4th of April. Another article in the same paper, sourced from the German press agency (dpa) read “A man splits India”. In it, too “Hindu fundamentalism” was stressed and the RSS even being compared to Nazi ideology. English newspapers, too, paint ‘Hindu fundamentalist’ Narendra Modi as highly dangerous for India and the world. And leading from the front, the Indian mainstream media freely label any Hindu organizations as ‘fundamentalist’ and ‘communal’ since years and leave no doubt that the secular fabric of Indian democracy will be endangered if this ‘Hindu fundamentalist’ comes to power.

The relentless media campaign shows already results worldwide. On my last visit to Germany, a woman sitting next to me in a bus asked, “What about the Hindu fundamentalists?” when she came to know that I live in India. I told her that the fear of Hindu fundamentalists is unfounded. In fact, I am in India precisely because I treasure the fundamentals of Hinduism.

I am sure that most left liberal ‘intellectuals’ in India and abroad will come down heavily on me if they hear me say that. There is so much shouting in TV debates and living rooms that one cannot get down to the basics and ask simple questions. To be fair to Hindus, such questions need to be answered by those who malign Hindus in general and Narendra Modi in particular.

One question for example is: what makes Narendra Modi a Hindu fundamentalist? Is it the fact that he acknowledges that he is a Hindu? Or is it the allegation that he did not do anything to stop the rioting in his state in 2002? This allegation has been proven wrong in spite of intense scrutiny and the explicit desire to find him guilty. Yet let’s for a moment suppose the allegation were true and he really would have encouraged killing of Muslims as revenge for the killing of Hindus in the train burning. In that case, he would indeed deserve severest punishment, but it would not make him a Hindu fundamentalist.

Let me explain: the basic philosophy of Hinduism or Sanatana Dharma, as it was originally called is in a nutshell: this visible universe, including our persons, is divine. Everything is permeated by the same divine essence which is called by many names. Hindus do not, unlike Christians and Muslims, divide humanity into those who are chosen by God and those who are eternally damned. Hindus are those rare human beings whose dharma requires them to regard all as brothers and sisters. Their dharma requires them further to respect nature and not to harm unnecessarily any living being. Hindu children are not taught to look down on those who are not Hindus, unlike children of the dogmatic religions who are taught that their God does not love those others unless they officially join their ‘true’ religions. Hindus are also comparatively kinder to animals. The great bulk of vegetarians worldwide are Hindus. Strangely, this fact is hardly ever acknowledged; nor is acknowledged that Hindus never fought crusades or jihads to establish their religion in foreign lands. On the contrary, since over thousand years Hindus were at the receiving end of such jihads and conversion campaigns and millions of Hindus were killed in cold blood because they were Hindus.

Now coming back to the media assault on Modi as a Hindu fundamentalist: Is he called a Hindu fundamentalist because he openly says that he is a Hindu? Well, this would not be wrong, as he indeed seems to follow the fundamentals of Hinduism. He seems to be a genuinely good human being who wants to give his best to develop India and has the welfare of all Indians in mind.

However, though it is factually not wrong, it is at the same time very unfair by the media to call Modi a Hindu fundamentalist, because the term ‘fundamentalist’ generally has a negative connotation when it comes to other religions, and especially westerners are not knowledgeable enough to distinguish between a Christian or Muslim fundamentalist on one side and a Hindu fundamentalist on the other. If a Christian or Muslim follows the fundamentals of his religions too strictly, it is generally considered as bad for society as a whole. The reason is that such a person will stress his superiority, as his holy book claims that only his religion is true and therefore naturally superior to all other religions. Such a person would see nothing wrong and even might feel it is his duty to convert people of other religions by hook or crook, or, if they don’t comply, despise or even kill them. One only needs to look at history to see what havoc Christian and Muslim fundamentalists have wrought all over the world. So it is no surprise that no European or American politician is labeled as “Christian fundamentalist”, when he simply confesses to be a Christian. Muslim politician, too, are not called “Muslim fundamentalists”, even if they head an Islamic state.

What most people however don’t know: there is no claim of superiority in Hinduism. The reason is that it is not an unverifiable belief system that has to be indoctrinated as the one and only truth, but it is open to enquiry. Blind belief is not required. The fundamentals of Hinduism are sound and conducive for a good character. It is actually good to follow the fundamentals of Hinduism and see the one divine essence everywhere in this visible universe.

“There is talk about this God and that God. Our country is not like that. Here we maintain Ishwar  (God) is one. The paths to attain him are different”, Modi said in an interview on April 12th, 2014 (Aap ki adalat), when a woman asked him whether Christians and their churches will be safe under him. He assured his audience that the motto of his party, in tune with the Constitution of India, is to treat all different paths equally. Communal frenzy will not be allowed to retard the growth of India, he added.

Modi’s words deserve to be taken seriously. He has governed Gujarat with a population of around 60 million for the last 12 years and no major communal clash took place there after the riots of 2002, whereas many riots happened elsewhere. Yet in those 12 years, Narendra Modi managed to greatly develop Gujarat and make it the envy of other Indian states. He proved that he is not corrupt and highly capable.

So why is Narendra Modi relentlessly labeled as Hindu fundamentalist by the world media, which knows fully well that this label will make him look ‘bad’ in the eyes of the world? Could it be that the west is actually afraid of an economically strong India and uses the bogey of Hindu fundamentalism to beat Modi and India down?

Maybe it is time for Hindus to tell the world to have a close look at the fundamentals of Hinduism. They might actually want to adopt them.