NEW YORK — A woman who told police she shoved a man to his death off a subway platform into the path of a train because she has hated Muslims since Sept. 11 and thought he was one was charged Saturday with murder as a hate crime, prosecutors said.

Erika Menendez was charged in the death of Sunando Sen, who was crushed by a 7 train in Queens on Thursday night, the second time this month a commuter has died in such a nightmarish fashion.

Menendez, 31, was awaiting arraignment on the charge Saturday evening, Queens District Attorney Richard A. Brown said. She could face 25 years to life in prison if convicted. She was in custody and couldn’t be reached for comment, and it was unclear if she had an attorney.

Menendez, who was arrested after a tip by a passer-by who saw her on a street and thought she looked like the woman in a surveillance video released by police, admitted shoving Sen, who was pushed from behind, authorities said. 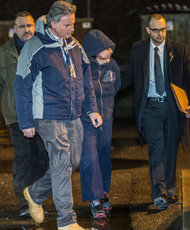 Uli Seit for The New York Times. Erika Menendez, 31, charged with second-degree murder as a hate crime, was led out of the 112th Precinct in Queens on Saturday

“I pushed a Muslim off the train tracks because I hate Hindus and Muslims ever since 2001 when they put down the twin towers I’ve been beating them up,” Menendez told police, according to the district attorney’s office.

Sen was from India, but police said it was unclear if he was Muslim, Hindu or of some other faith. The 46-year-old lived in Queens and ran a printing shop. He was shoved from an elevated platform on the 7 train line, which connects Manhattan and Queens. Witnesses said a muttering woman rose from her seat on a platform bench and pushed him on the tracks as a train entered the station and then ran off.

The two had never met before, authorities said, and witnesses told police they hadn’t interacted on the platform.

Police released a sketch and security camera video showing a woman running from the station where Sen was killed.

Menendez was arrested by police earlier Saturday after a passer-by on a Brooklyn street spotted her and called 911. Police responded, confirmed her identity and took her into custody, where she made statements implicating herself in the crime, police spokesman Paul Browne said.

The district attorney said such hateful remarks about Muslims and Hindus could not be tolerated.

“The defendant is accused of committing what is every subway commuter’s worst nightmare,” he said.

On Dec. 3, another man was pushed to his death in a Times Square subway station. A photo of the man clinging to the edge of the platform a split second before he was struck by a train was published on the front page of the New York Post, causing an uproar about whether the photographer, who was catching a train, or anyone else should have tried to help him.

A homeless man was arrested and charged with murder in that case. He claimed he acted in self-defense and is awaiting trial.

It’s unclear whether anyone tried – or could have tried – to help Sen on Thursday.

“It’s a very tragic case, but what we want to focus on today is the overall safety in New York,” Bloomberg told reporters following a police academy graduation.

But commuters still expressed concern over subway safety and shock about the arrest of Menendez on a hate crime charge.

“For someone to do something like that … that’s not the way we are made,” said David Green, who was waiting for a train in Manhattan. “She needs help.”

Green said he caught himself leaning over the subway platform’s edge and realized maybe he shouldn’t do that.

“It does make you more conscious,” he said of the deaths.

Such subway deaths are rare, but other high-profile cases include the 1999 fatal shoving of aspiring screenwriter Kendra Webdale by a former psychiatric patient. That case led to a state law allowing for more supervision of mentally ill people living outside institutions.