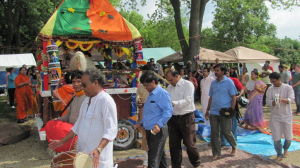 FITCHBURG — During the Madison Hindu community’s Chariot Festival Sunday, celebrants pulled an ornate chariot around the grounds of its Fitchburg temple.

Narend Reddy, president of the American Hindu Association, based in Fitchburg, envisions the festival growing so big that one day local celebrants will pull the makeshift temple-like chariot, called a rath, out on the streets of Madison.

“In other places, they pull it out in the road, street by street. In India and places like Chicago, New York and Houston they pull the chariot out in the city streets,” Reddy said.

“My dream is that one day (the celebration) becomes big enough to take it to the streets of Madison. We want to make it a summertime event for the city.”

Sunday, and for the two years prior, the festival has been confined to the American Hindu Association Shiva Vishnu Temple in Fitchburg, a 7-acre property the association purchased in 2009 at 2138 S. Fish Hatchery Road.

Last year’s event drew 450 people, while this year’s festivities brought in about 750 from all over the area, said Bikash Pattnaik, one of the festival’s founders.

Ten years ago there were only about 200 families, added Srinivasa Rao, an association trustee, noting that a lot of Indians come to Madison to work jobs in the information technology and computer software fields. Or they come here to attend UW-Madison.

Hinduism is the biggest religion in India, with more than 80 percent of the population identifying as Hindu.

In India, the Chariot Festival is called Rathyatra, which Rao said is one of his country’s important festivals, with each region celebrating in its own way.

“Every day is a festival — 365 days we have celebration,” said Bahee Sathasivam, who founded the association.

The Chariot Festival celebrates the deity of Jagannath (reincarnation of Lord Vishnu/Lord Krishna), who is worshipped along with his older brother Balabhadra and sister Subhadra.

Food from local Indian restaurants including Minerva, Haveli, Maharaja, Swagat and Taj was for sale at the festival, along with Indian clothing and jewelry. A program included speeches, music and dance.

Proceeds from the event are going toward the construction of a 7,000-square-foot community center and temple on the property, which will be used for prayer, educational instruction, yoga, meditation, cultural activities, weddings and other functions.

Construction is set to start next month.

Currently, the temple’s members worship in a three-bedroom house that sits on the property, but the space no longer meets the growing community’s needs.

Rao said his main goal in establishing the temple and community center is to teach Indian children important Hindu values before they become teenagers.