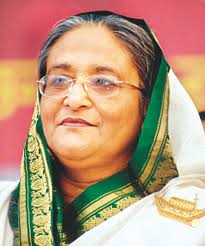 Prime Minister Sheikh Hasina has asked minority Hindu community in Bangladesh to be firm in demanding their rights and join hands in nation building with the spirit of non-communalism.

“Bangladesh is your motherland, you were born here. You have rights… You must live in this country with your own rights maintaining a firm hold,” Ms Hasina said at a reception last night she hosted at her Ganobhaban official residence for the Hindu leaders to mark the Janmashtami festival.

“All people of the country will live with equal rights and perform their religious rituals freely,” she said, urging the Hindus to exercise their religion being imbued with the spirit of Lord Krishna “who was a ‘Pujari’ (worshiper) of truth, justice and beauty”. She said her government ensured rights to practise one’s own religion by reviving the spirit of secularism in the Constitution and scrapped a controversial law to dispel complexities over ownership of properties by the members of the minority community.

Bangladesh witnessed widespread violence, with minority Hindus being major victims, ahead of the controversial January 5 elections that were swept by Ms Hasina’s Awami League after the Opposition Bangladesh Nationalist Party boycotted the polls.

During the 2014 elections, Ms Hasina warned perpetrators of attacks against the minority Hindu community, saying such assaults could have repercussions in neighbouring India.

Ms Hasina said the BNP and Jamaat-e-Islami carried out attacks on the people who believe in the spirit of the independence and “they had killed 17 people in Satkhira alone at that time when they did not see who was a Muslim, who was a Hindu or who was a Christian”. The High Court earlier directed the government to take adequate steps for the security of Hindus.