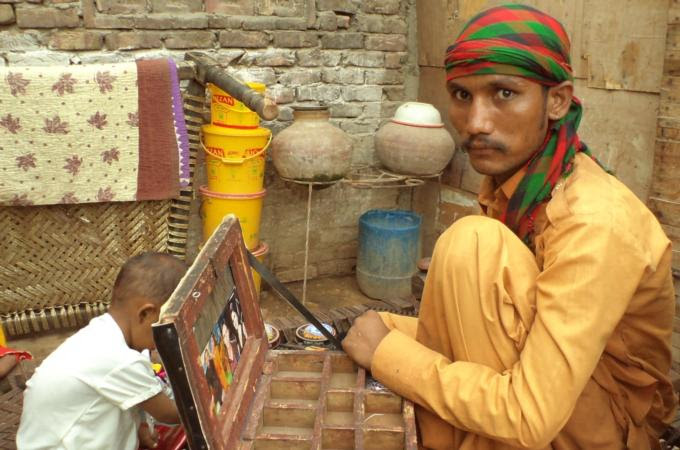 Hyderabad, Pakistan – About two months ago, a Muslim businessman approached Dharmo Sochi and put a gun to his head, demanding his Hindu daughter’s hand in marriage.

The businessman, Jameel Solangi, allegedly threatened the family with abduction and murder unless they acquiesced.

Sochi’s 16-year-old daughter, Madhuri, had previously been harassed by Solangi but was too traumatised to tell the family about it, according to her aunt, Sri Devi.

“Dharmo dared him to shoot,” Sri Devi told Al Jazeera. “He thought it better to die than allow this unholy union between Hindu and Muslim. Somehow we pushed Solangi out of the house and no one was hurt.”

From that day onwards, Madhuri – who works as a panhandler, the traditional profession for women from her Sochi caste – was too fearful to leave the house.

Pakistan is home to about two million Hindus, most of whom live in the southern province of Sindh and belong to lower castes, including Sochi. While upper-caste Hindus complain of their traders being kidnapped for ransom, lower-caste Hindus say their daughters are being targeted.

“Our community can bear looting and the kidnapping of our men, but the abduction of our daughters and wives is too painful,” Bhawan Das, who holds a National Assembly seat reserved for minorities, told Al Jazeera.

“Unfortunately, the frequency of these crimes is increasing due to religious extremism.”

According to a report from the Movement for Solidarity and Peace, about 1,000 non-Muslim girls are converted to Islam each year in Pakistan. Every month, an estimated 20 or more Hindu girls are abducted and converted, although exact figures are impossible to gather, said Amarnath Motumal, the vice chairperson of the Human Rights Commission of Pakistan (HRCP).

In Madhuri’s case, Solangi claims to love the young woman and does not understand why she refused to marry him.

“Right now she goes from house to shop begging for charity,” he told Al Jazeera. “I can provide her with so much more.”

Asked why he threatened to shoot Madhuri’s father, he said: “What else am I supposed to do? I can’t give up on her.”

While religion appears to be a secondary issue for Solangi, it is a chief concern for Madhuri, who would have to convert if she married a Muslim.

“I’m terrified he will kidnap me, force me to accept Islam and marry him,” she told Al Jazeera. “He is not Hindu. I will die before I marry him.”

HRCP chairperson Zohra Yusuf said Muslim girls in Pakistan are also abducted and married against their will or sold into prostitution.

However, “if you compare the number of kidnapped Hindu and Muslim girls, in relation to their population in Pakistan, you will see that Hindus are more vulnerable” – especially poorer ones such as Madhuri.

The HRCP doesn’t have a research to back its claim. No other organisation has the statistics on it because a large majority of the crimes go unreported.

One official who wished to remain anonymous said that the HRCP has been planning to do a countrywide survey of abducted girls in the last 10 years, “but it’s not high on the priority list”.

Amar Meghwar, a community activist, said such cases are rarely reported to the police because “our screams fall on deaf ears”.

Sanaullah Abbassi, Deputy Inspector General of Police for Hyderabad told Al Jazeera: “We do what we can. Sometimes the girls run away by choice, what can we do in such cases?”

Sumbal Bai, a Hindu worker at a local thread-making factory, said her daughter, Sanam, was abducted two years ago at the age of 18.

“One of Sanam’s co-workers, a Muslim boy, drugged her into unconsciousness and whisked her to Khanewal, Punjab,” she told Al Jazeera.

When Sanam’s father and brother attempted to rescue her, they discovered the abductors had financial clout and political connections.

“We have nobody to fall back on,” Sumbal Bai said. “We have lost one daughter and we risk losing another if we make too much noise.”

Sindh province’s top police official Sharjeel Kharral, told Al Jazeera that the lower tier of the police force is not sensitised to the discrimination faced by Hindus.

“It’s true that they don’t prioritise the community without pressure from the media or civil society.”

Kharral said Hindus in Pakistan are a scared and vulnerable minority and forced conversion is an example of their vulnerability, especially when it occurs to their women.

“The problem is that while some cases are actually forced conversions, others are love marriages and there is no way for us to differentiate between them.”

With little support from authorities as well as civil society, thousands of Hindus are forced flee to neighbouring India.

Some Muslim leaders consider it an honour to convert non-Muslim girls.

“There’s no such thing as forced conversions in Islam and in Pakistan,” he told Al Jazeera.

This year, Malik has converted two Hindu men and 15 Hindu women. Asked about this ratio, he said: “Hindu women come readily to us because after conversion we facilitate their marriages to Muslims.”

“When Hindu girls are kidnapped, forcibly converted and married to Muslims, the police, government and courts all turn a blind eye,” Moorani said, noting this encourages more abductions and forced conversions.

Civil-rights activists maintain that because there has never been a court ruling on forced conversions in support of the aggrieved Hindu families, there is no precedent to deter the crime.

“Pakistan was built in the name of Islam,” Sanaullah Abbasi, the Deputy Inspector General of Police of Hyderabad, told Al Jazeera.

“This makes it easy to exploit religious minorities in our country,” he conceded.

For the Hindu community, their problems are at the bottom of the priority list. They may try to break the status quo, but no conscious effort from the government is being made to resolve the issue of forcible conversions amongst Pakistan’s small minority.