OHIO: ‘Ekal Vidyalaya Foundation-USA (EVF-USA)’, recently (Oct. 3-5) hosted an international conference in Cincinnati, Ohio to address various issues facing rural education, hygiene, and integrated development in remote parts of India, where it operates. In opening remarks, Shyamji Gupta, founder of ‘Ekal Movement’ set the tone by challenging the gathering to undertake a new initiative for the rural masses. Inspired by the clarion call for a ‘Swachha-Bharat’ (Clean-India) by P.M. Narendra Modi, Ekal volunteers whole heartedly adopted this campaign to create and implement a strategy to clean the Ekal Villages where 1.5 million children are being nurtured and groomed.  The campaign will create awareness and develop sustainable approaches to keep the villages clean.   This conference had brought together volunteers, field teams and philanthropists from across US, India and Canada and astoundingly raised Rs. 1 Crore for this purpose. 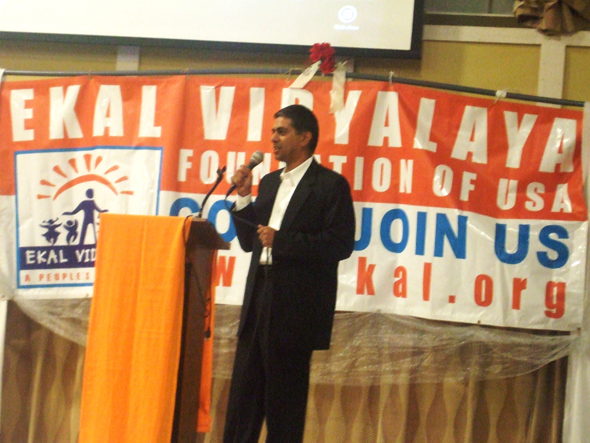 Spearheading the on-the-spot fundraising efforts Himanshu Shah, CEO, Shah Capital, said “poor sanitation and lack of solid waste management has had tremendous negative impact on the health of Indians all over.  It is time we address this issue”. He contributed significant amount of his own monies to the cause and matched donations raised by Ekal. Welcoming this impromptu generosity, Vinod Jhunjhunwala, President of ‘EVF-USA’ said, “while ideas are plenty, India often loses out on implementation. Ekal, with its reach in over 54,000 villages throughout India has wide grass-root network that can effectively implement this cleaning initiative”.  Ekal uses education as a primary vehicle to bring holistic development of remote and rural villages. In addition to education, Ekal is working on health, sanitation, agriculture and development. Ajay Singh, Project Coordinator for EVF-USA, informed the gathering about the state-of-the-art approach adopted by ‘Ekal-India’ to administer and monitor various aspects of ‘Ekal’.  He further elaborated that the teacher’s and student’s third-party assessment, automated school allocation as well as their ‘google-mapping’ was already underway. The movement has created so much excitement among youth in the U. S. that several college students are going to Ekal villages to study the movement. Recently, Rohan and Anjeli Sharma, brother-sister team, both less than 15 year old, spent three weeks in an Ekal Village, learning how Ekal had impacted villager’s lives. The reciprocal volunteerism of the Ekal model has also caught the eye of the Afghanistan community who feel that this unique model could be beneficial to the tribal-rural villages of Afghanistan. A team from Afghanistan headed by Sunil Ishairzay, visited India, last year, with the sole intention of studying and replicating Ekal education model in Afghanistan.

Several innovative solutions to a range of issues including the use of technology for education and the micro-rural entrepreneurship were also discussed. In several villages, solar energy is already being used by the villagers for life’s basic necessities with help from ‘Ekal’. At the conference, Ekal also addressed the national tragedy of the floods affecting the Kashmir valley.  Ekal USA has earmarked $150,000 for these flood victims. In short, Ekal Vidyalaya, the largest grass-root movement undertaken by NRIs and Indians is playing a key role in the lives of neglected masses for their self-sustenance and empowerment.