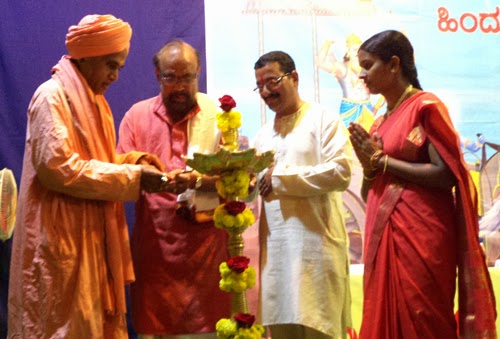 Shirsi (Karnataka) : Why so much of importance is given to caste when this country is governed as a secular country ? The rulers are dividing society only for own political gains; following the policy of ‘Divide and Rule’; therefore, we should elect only patriots, advised Shriman Niranjan Pranavaswarupi Shri. Guddeleeshwar Mahaswamiji from Hosaritti, Haveri. Hindu Janajagruti Samiti (HJS) had organized Hindu Dharmajagruti Sabha on Monday, 21st December at Sri Vidyadhiraj Kala-kshetra. It was attended by about 450 devout Hindus. The other dignitaries addressing the sabha were Shri. B. G. Mohan of VHP, Shri. Kashinath Prabhu of HJS and Kum. Priyanka Swami of Sanatan Sanstha.

Hindu girls will be protected from love jhad if love and respect towards Dharma is awakened in them ! – B G. Mohan

Muslim men marry Hindu girls and convert them under their ploy of love jihad. If the girls oppose, they are forced in prostitution or killed; therefore, if love and respect towards own Dharma is awakened in Hindu girls, they will be protected from love jihad.