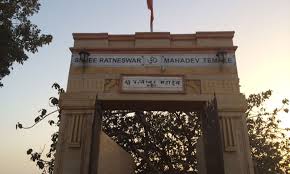 Say that if urgent repairs are not carried out, walls of the temple might collapse putting in peril the building, lives of worshipers who visit it as well as the religious idols and symbols

The Sindh High Court (SHC) on Tuesday appointed a court official as commissioner to verify whether or not the work for preservation of 150-year-old Shree Ratneshwar Mahadev Temple in Clifton has commenced.

The petitioners submitted that Bahria Town had undertaken a project from Park Tower traffic intersection to AT Naqvi Roundabout, which included the construction of a flyover in front of Park Towers and underpasses near Kothari Parade in Clifton.

They said that the construction project had created unrest amongst the Hindu community as it posed a serious threat to the foundation of 150-year-old Shree Ratneshwar Mahadev Temple.

“With the commencement of the project, the historic temple –which is also a national heritage – is in danger,” the petitioners stated.

They said that if urgent repairs were not carried out, walls of the temple might collapse putting in peril the building, lives of worshipers who visit it as well as the religious idols and symbols.

Earlier, the court had directed authorities concerned to ensure full and effective safety and security of the subject building and carry out work for preservation of subject heritage site under the supervision of qualified and reputed civil engineers.

During the hearing on Tuesday, petitioners’ counsel Haider Waheed said that despite repeated and categorical orders of the court and undertakings by Karachi Metropolitan Corporation (KMC)’s counsel, work had not yet commenced. However, Bahria Town counsel Khalid Jawed Khan told the judges that KMC had engaged the civil structural engineer and after certain paper work the work for the structure’s preservation would commence.

In order to verify the claim, the court appointed a court official as commissioner to visit and inspect the subject site and report to the court as to whether the work as mandated by the court had commenced or not and the pace and progress of the work if it had commenced as claimed.