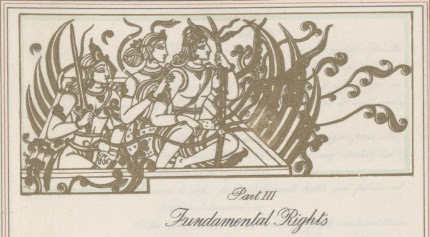 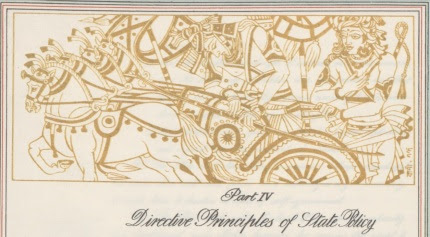 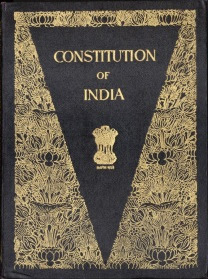 Upananda Brahmachari | Hindu Existence Bureau | 26 January 2014:: India i.e. Bharat is celebrating its 65th anniversary of adopting its Constitution as it was taken granted on the day of 26th January, 1950. We are very much proud for the Indian Constitution and celebrating the Republic Day, but we never look through the Hindu Elements in Indian Constitution or the implication of Hindu Culture and Tradition in it.
The partition of India in 1947, made this unique land of cultural unity divided into two pieces on the basis of two nation theory, Hindu-Muslim basis which was undesirable to the majority people.  But, the communal minority Muslims procured their holy land of Pakistan on the strength swords and the cunning politics in connivance of the British who adopted ‘divide-&-rule’ policy.
Though least blood shedder and the minimum trouble taker Muslim conspirators materialized their holy land Pakistan even trough bloody direct action against the majority Hindus, the largest contributors of freedom struggle, the Hindus did not get the a Hindu India in return.
In contrary, the band of Muslim leaguers stayed in India only to have more slice of bread from Hindu’s share.  The Muslims who did not leave this country showing their so-called secular mentality at the time of partition, were not the patriot people, one can misunderstand the reality. But, they took a risk to stay here to form another movement of partition whenever it would be possible.  Kashmir to Kerala, Hyderabad to Muzaffarbad, we have sufficient evidences to make it clear.
To strangulate the Hindu voice to raise a demand of Hindu Rashtra in India, a long series of agents were present in the Constitute Assembly and Drafting Committee for adopting a Non Hindu texture of Indian Constitution. 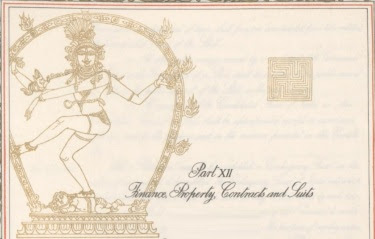 The presence of hypocrite secular, Arab Culture propagator and prominent Muslim Leaguers like Liyakat Ali Khan, Firoz Khan Noon, Khaja  Nizamuddin, Shaid Swharabardy,  Jafarulla Khan, Md. Saadullah etc. in the above committees were suitably used their efforts to shield any chance to table any possibility of Hindu Nation and Hindu Constitution in India. Most of these people were the staunch supporters of Muslim League, Pakistan and were involved in Direct Actions against Hindus. We cannot ignore the most critical role as played by Maulana Abul Kalam Azad, very silently to deter any Hindu fervor of Indian Constitution. It must be noted here that the hidden relationship of Azad with the communist leader Muzaffar Ahamed was linked with the partition of India and Azad never challenged the ‘Pakistan Proposal’ of communist lobbies as drafted by Muzaffar Ahamed.  All Muslim leaders in Congress, Communist parties  and the Muslim Leaguers had their unique aspiration for Pakistan in their brain and heart, but sometime some of them dramatically persuaded otherwise.
A part of this entire Pakistan lobby stayed in India after partition and engineered their tainted hands in the drafting of Indian constitution to make it ‘anti-Hindu’.
God saved us as at least three true nationalists were present in the Constitute Assembly and Drafting Committee to adopt some deliberate actions in favour of the majority people and Hindu Nature of this ancient land.  Sardar Vallabh Bhai Patel, Dr Bhim Rao Ambedkar and Dr Shyama Prashad Mookerjee acted fortunately in favour of the majority sentiments in this land, where the Hindu sentiment was the most unwanted subject in Indian politics.
As Indian Constitution says the measures of ‘prohibiting the slaughter of cows’ as to protect it as a tradition of this land or otherwise adopting such provisions of ‘Rights’, ‘directive principals’ or other mechanism to rule this land, has been derived from Hindu Values and put into it as to check the further division of this land and to protect the statute and texture of the Bharatiyata of the people of this land. Obviously, the Indian Constitution was prepared, permitted and propounded on the heights of Humanitarian outlook and never on any Semitic concepts and rejected the malfunctions of Sharia  or the orthodoxy of any church in its preview. 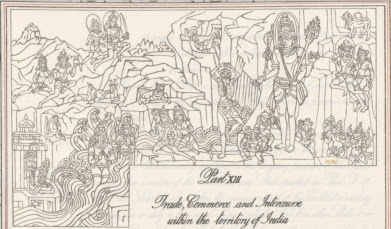 Afterwards, this philosophy was challenged by Mrs. Indira Gandhi (don’t forget her name as Mymuna Begum and wife of Firoze Khan), the autocrat of Indian emergency period and attacked Indian Constitution in its Preamble by infiltrating two words,  ‘Socialist’  and ‘Secular’ in the unfortunate 42 amendment in 1977.
Then Prime Minister, Indira  Gandhi tried to please her communist friends  and the international Russian lobby by inserting ‘Socialist’ and evidently tried to please the communal forces in Muslim and Christian community by inserting ‘Secular’, so that this Constitution would be a powerless fallacy for any Hindu rights or empowerment. As a result of that more and more demands of religious reservation, communal education systems, sectarian status for some states etc. are hitting  the body of democracy in India on rapid fire basis, only to  destroy it fatally.
As told by me by late Pabitra Kumar Ghosh, a venerated and veteran journalist in Bengali media that Smt. Gandhi then tried to delete the pro-Hindu pictures from the original copy of Indian Constitution as provoked by the communists and the communalists but it could be possible by relying the intelligence reports as it might be a great retaliation as an aftermath from the patriotic forces.
Most of the students and concerned readers do not know even the pictures illustrated in its original copy of the hand written Constitution of India. Such books are also not available in the market containing the pictures of Indian Constitution.  The calligraphy in the original constitution was done by Prem Behari Narain Raizda. It was illuminated by Nandalal Bose and other artists, published by Dehra Dun, and photolithographed at the Survey of India Offices. 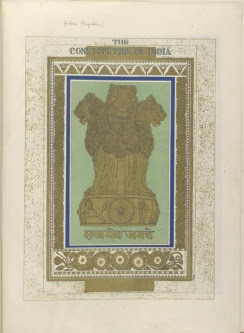 The twenty pictures so far enshrined in the Constitution of India may be termed as the reflection of Culture and Tradition of Bharat and most evident of the context of Hindu culture of Bharat. These pictures reflect the historicity of the Lank Vijay and Sita Uddhar by Lord Ram (Victory of Lanka and rescue of Sita), Gita Upadesh by Lord Krishna (Exhorting Gita in Kurukheshtra), Vedic Life, Ganga Anayan by Bhagirata ( Bringing Ganages from heaven to the earth by Bhagirata), King Viktamaditya, Gautam Buddha, Tirthankar Mahavir, illustration of Nalanda University, Chatrapati Shivaji, Guru Govinda Singh, Rani Lakshmibai, Scene of Himalaya which are exclusively reflecting the message of rich Hindu Culture and Tradition of Bharat.
Every picture drawn in every Part of the Constitution of India has its own relevance and significance. The Part I of The Union and its Territory starts with the Seal of Mahanjadaro.  The seal emblems with the traditional Oxen worship in India. Part II, Citizenship starts with the scene reflecting the Vedic Tradition of Yajna tradition in India; Chapter III, Fundamental Rights starts with the win of Truth and faith over the evil power by depicting the picture of Lanka Vijay; Part IV, Directive Principles of State Policy reflects of the knowledge of Gita as exhorted by Lord Krishan; Part V, The Union depicts the picture of the Sangha established by Lord Buddha, Part VI, The states in Part A.. shows the picture of Tirthankar Mahavir, picture of Nataraj in Part XII and so on. One cannot deny the significance of these pictures in relation of Indian culture and heritage in the context of  the philosophy of Indian Constitution.
Only two contemporary Indian icons of freedom struggle have been included in the Constitution. They are Mohandas Karamchand Gandhi (two pics, one of Dandi March and other is Noakhali Hindu Carnage visit) and Netaji Subhash Chandra Bose (one pic of role of Netaji and Indian National Army in Indian Freedom Struggle). Two controversial pictures of Muslims viz. Akbar and Tipu Sultan are also included in it. Akbar’s role to capsize the warrior Rajput power and Tipu’s role for Hindu massacre are always debatable points in the Indian history.
But, in no way the Hindu significance of the Holy Indian Constitution can be denied. This generation and the next must know it with full deliberation.
Courtesy: World Digital Library & Indian Kanoon.  Read the INDIAN CONSTITUTION here.
[ To see the Article in a larger view plz go to the link in Slide Share: http://www.slideshare.net/slideshow/embed_code/30459044 ]
Source: Hindu Existence