The Hindu Temple in St. John’s held a ceremony in support of people affected by the earthquake in Nepal, and the community is planning a fundraiser to help with relief efforts.

Officials in in Nepal say the death toll following the April 25 earthquake has reached 7,276 and is the worst quake in the area in more than 80 years.

A handful of people from Nepal, or who had previously lived there, were in attendance at Sunday’s ceremony at the Torbay Road temple.

Madhar Adhikari said his daughter lives in Nepal and he was worried about her, but was finally able to reach her by phone.

“I thought about my daughter, but she was well,” said Adhikari. 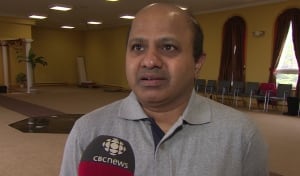 Seshu Adluri, a community member with the Hindu Temple in St. John’s, says people affected by the earthquake in Nepal are going through a difficult time, and it’s important to provide support. (CBC)

Seshu Adluri, originally from India and a member of the temple’s community, said the temple wanted to bring people together and reach out to offer support to people here, as well as in Nepal.

“We must wish good things for everybody. It is said that if we wish strongly enough, it does have an effect,” he said.

Full scope not yet known

Adluri said the full scope of the earthquake’s devastation isn’t yet known and there are families still unsure what happened to their loved ones.

“Loss of life is terrible. They’re saying 6,000-plus but we all know it’s going to be much higher in reality, because 6,000 is probably just the government count,” he said.

“There must be many whose names are not yet known and there may be people, unfortunately, buried under the rubble. It will be days or weeks before the full tally is known and it’s a tragedy.”

The temple also raised money over the weekend to assist in the relief efforts ongoing in Nepal, and is planning more fundraising with a lunch at the temple in June.