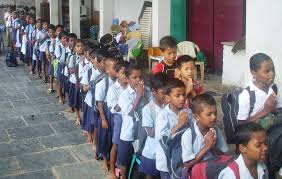 Miraj (Maharashtra) : On 28th December, students from 2nd standard were taken to a church by one school. After going there, students were given cake, were made to pray and given a book titled ‘Nava Karar (New contract)’.  Parents of one of the students narrated to Shri. Anand Rajput another shocking incident. The students were taught a song in ten minutes that said ‘Saitan gaadi chalaega to nark me jaega; Yeshu gaadi chalaega to swarg me jaega’; as a result, few students have been singing this song for past 4 days even at home.

Shri. Rajput said it was an attempt to malign Hindu Dharma. Srikrushna has been shown as driving a chariot in Geeta; therefore, it is like calling Srikrushna as Satan. If Jesus drives vehicle, one would go to heaven means teaching students that only Jesus can save them. It is very annoying matter and Shiv Sainik will go to that school to ask for an explanation.