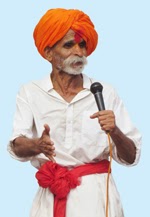 In Srimadbhagvadgita, when Arjun was not prepared to fight Dharmayuddha (Battle of Dharma) on the battlefield, that time Shrikrushna tells him and shows him that he was merely an instrument. Remember, I only am the doer ! Be ready and fight. The same way, Swami Ramkrushna Paramhansa, Swami Vivekanand, Shivaji Maharaj. Sambhaji Maharaj, and the mavlas like Bajiprabhu Deshpande, Tanaji Malusare, Hiroji Naik, Jiva Mahale accompanying them in fighting, were all forms of God.

Today Hindu society is in a very pitiable condition. Hindu society is impotent. Hindus from Kanyakumari to Kashmir lack faith in Dharma and Nation. Grains of sand on a beach, though close to each other yet they do not touch one another at all. That is the state of Hindu society today. If every Hindu is touched by Rashtrasants then he will fulfil the purpose of his life.

Today the state of the society is same as it was before Shivaji Maharaj got Hindavi Swarajya. Seculars, rationalists and progressive are causing harm to the nation by spreading thoughts of secularism. These people have divided the country into three parts and that too in the name of Dharma. Today also Muslims or Christians do not speak on secularism; but Hindus only speak on it. Secularism is an adultery with the future of Hindusthan. We will never allow it. Unless the society is forced to drink sanjeevani (Drink having magical healing power) of the names of King Shivaji and king Sambhaji this sterility will not cease. The nation will not last as a Nation until this country does not become an ocean of patriotism.

So long as Hindusthan does not experience the pangs (Labour pain) of patriotism, devotion for freedom and faith in sacrifice, we will not last in the three worlds (Heaven, Earth and Hell) as a free Nation. Presently educated society has become self-centred/mean minded. Prime Minister of our country is also of the same nature. We are suffering Kashmir problem, linguistic division of states, madness of secularism by the grace of the first Prime Minister Jawaharlal Nehru. Gulzarilal Nanda who followed Nehru could hold the position just for 2 to 6 months. In that period also he sided with Muslims at the time of the riots.

On 30.11.1972, the then Prime Minister Indira Gandhi had held a Muslim Convention at Devband (Near Kanpur). At that time she had said, ‘I am proud of the fact that, the country Bharat to which I belong tois a great Nation comprising Muslim society.’ Thereafter her son, Rajiv Gandhi went to Turkstan and while addressing their Assembly he said, Hindusthan and Turkastan have friendly relations since ancient times. I am proud to say that one of your citizens had come to our country in 711 with a message of world peace.

What did our current Prime Minister Dr. Manmohan Singh say ? Muslims have the first right to anything in Hindusthan. When he uttered those words, none of the MPs rose to say, what is your opinion about your wife ? What about your son ? What about your daughter-in-law ?

What will be the future for that country having leadership like this ? If the Nation has to be relieved from this terrible situation then, there is no alternative to developing Dharmatej of Shivaji and Sambhaji Maharaj to establish Hindu Rashtra. The Society that calls itself educated, in conduct they are zero.

Presently Hindu society is facing adverse situation at social and national level. The biggest fault in it is that we do not know who, is our enemy. None, from political leaders to Sarpanch in a village is aware about his enemy.  Our neighbours China and Pakistan are our greatest enemies.

There is only one party today in Bharat that is carrying Shivaji Maharaja’s Saffron flag on its shoulder and that is Shivsena ! Balasaheb Thakre unfurled Saffron Flag in the Assembly in Maharashtra when rationalists, secular, scientists, progressive, socialists were carried away by Gandhiji’s thoughts.  Children are born, educated and become knowledgeable/wise in our country and make other’s country prosperous. We do not find children having Savarkar-attitude anywhere in our country.

What we see with our eyes, is perishable. We can see it only in light. With the blessings of Saints only we will be able to have a vision with our eyes (Closed) Atma/Parmatma (Soul/Supreme Soul –God).