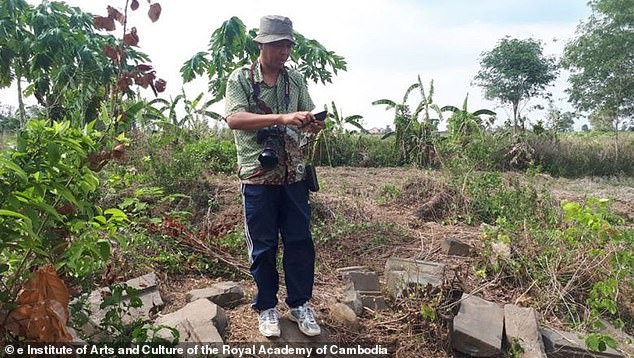 CAMBODIA, May 16, 2019 (Daily Mail): Archaeologists claim to have found the remnants of nearly 100 previously undiscovered ancient Hindu temples in the jungles of Cambodia. The temples, which in many cases are just foundations, were unearthed in Kratie Province’s historical Samphu Borak area of eastern Cambodia’s Kratie Province. The team believe they date back to the 6th and 7th centuries, hundreds of years older than the country’s world-famous Angkor Wat temple complex which dates back to the 12th century. Samphu Borak was one of the most densely populated regions of the pre-Angkorian era of Cambodia. Thuy Chanthourn, deputy director of the Institute of Arts and Culture of the Royal Academy of Cambodia, said the remains of the temples had not been recorded in earlier studies, by either French or Cambodian archaeologists.

Alison Carter from the Anthropology Dept at the University of Oregon, who is a director of P’teah Cambodia, researching ancient ruins, told Asia Wire: “I think when we hear temple sites people think of Angkor Wat or Ta Prohm, but in fact many Angkorian and especially Pre-Angkorian temple sites were quite small. Everyone focuses on the places in Cambodia where there is standing architecture but finding so many sites in other parts of the country demonstrates that other parts of Cambodia were occupied in the past and are important places. Compared to the Angkorian period, we don’t know very much about the Pre-Angkorian period. Any new information like this helps us complete a more holistic picture of the past.”