As per reports, The Hawaizaada film starring Ayushmann Khuranna’s is based on the life of scientist Shivkar Bapuji Talpade, who is said to have built India’s first unmanned aeroplane. The movie is helmed by Vibhu Puri is set in Bombay of 1895. The film also stars Mithun Chakraborty and Pallavi Sharda.

Details of the movie are as followed :

Recently, a fictional biopic movie named ‘Hawaizaada’ based on the life and work of Shivkar Bapuji Talpade has been produced and is due to be released on 30 January 2015. The details of the movie is-
Banner – Trilogic Digital Media Limited
Release Date – 30 Jan 2015
Director- Vibhu Virender Puri
Producers- Reliance Entertainment, Rajesh Banga, Vishal Gurnani and Vibhu Virender Puri.
Story and Screenplay- Vibhu Puri and Saurabh R. Bhave.

But some people have alleged that this movie depicts Pt. Shivkar Bapuji Talpade in bad light. They are saying that ‘In this movie Talpade has been shown as a bachelor interested in various types of machines.But his parents were against his activities. Not being getting support from his family member he feels demoralized. He went to a bar and started drinking. Later he fell in love with the bar dancer and had illicit relationship with her. In due course of time he came in contact with a person named Subraya Shastri who was having knowledge about aircraft. He guided Talpade and they made and flew the first aircraft.’

Actually, Pandit Shivkar Bapuji Talpade was married to Smt. Laxmi Bai. They were blessed with two sons and one daughter. Some people may ask that though Pt. Shivkar was married how can you claim that he wasn’t going to bar or had relationship with a bar dancer ? But as per references, none of the biographies of SBT mentioned that he was a Bachelor and was attending the Bar. Rather he was a member of Arya Samaj, Kakadwadi since his school days. As a Arya Samaji member he had to give the declaration that he is a vegetarian and a non-drinker. Also SBT wrote five books, two on Vedas and three on Maharshi Patanjali Yoga Darshan. This shows that he was a deep scholar and a pious soul. His books are-

Hence to stop defamation of Pt. Shivkar Bapuji Talpade, these persons have filed writ petition in Bombay High Court with No. OS WPL/199/2015 dated 23.01.2015 (If anyone want to check authenticity of this information, one may check following link : http://bombayhighcourt.nic.in/dailyfiling/PDF/dispfilOS230115.txt ) 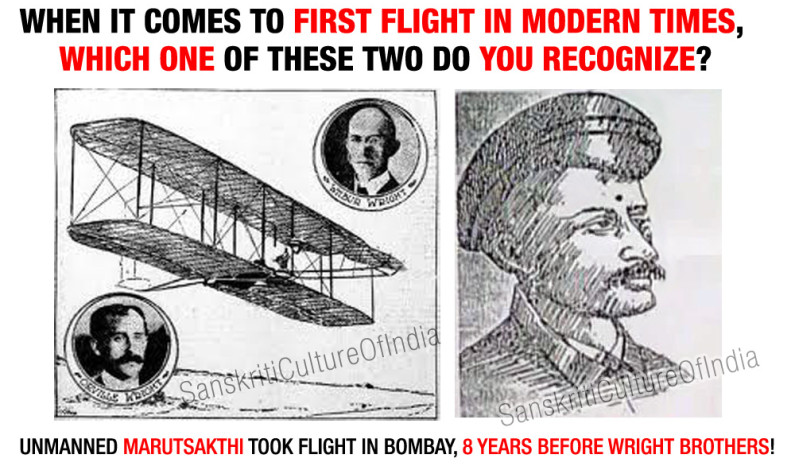 Pandit Shivkar Bapuji Talpade was born in 1864 in Mumbai, Maharashtra.(Ref. 1) He studied in Sir J. J. School of Art, Mumbai. (Ref. 2) During his study he came to know about ancient Indian Aeronautics through his teacher Chiranjilal Verma. Chiranjilal guided Talpade to read Swami Dayanand Saraswati works related to ancient aeronautics viz. ‘Rigvedādic Bhāshya Bhumikā’ and ‘Rigved and Yajurveda Bhāshya’. Inspired from these texts he decided to construct Vedic Vimāna described in the Vedas and started learning Vedic Sanskrit language. (Ref. 3)

Shivkar used the scientific method of decoding Veda Mantras prescribed by Swami Dayanand Saraswati. Following Dayanand’s step, he studied the fundamental principles of Vimana from the Veda Mantras. To carry out the experimental and observational analysis of the Veda Mantras, he set up a laboratory in 1892. Based on his findings, he was the first man to claim that the shape of a Vimana is like that of a bird. Initially he built a prototype and later constructed a 6×4 feet aircraft from wires and placed the ‘Shanku-Yantra’ in the centre. (Ref. 3)

This unmanned plane was flown in December of 1895 at Girgaum Chaupati beach in front of audience. It is said that the plane rose to a certain height and then came down on the ground. (Ref. 4) But this event wasn’t recorded officially by the British Government.5 He also exhibited this Vedic Vimāna in an exhibition at town hall in Mumbai organised by the Bombay Art Society. (Ref. 1)

Shivkar was short of funds and didn’t receive any support from the then British government. (Ref. 4) As a result he could not expand his research further but he decided to pass on his work and published a Marathi book titled ‘Prāchina Vimāna Kalechā Shodha’ in 1907. (Ref. 6) Later in 1909 he published ‘Rig-Veda – Prathama Sukta Evam Tyāchā Artha’ explaining the scientific method of deciphering the Vedas. (Ref. 7)

In 1916, Shivkar studied Maharshi Bharadwāja Vaimānika Shāstra under the guidance of Pandit Subrāya Shāstri of Bengaluru and using the principles from the book he built Marutsakhā Vimāna. His first attempt of Marutsakha was not very much successful but he kept on rectifying the defects. (Ref. 8) His rigorous and solo effort made him to struggle with his health. Finally Shivkar left his body on 17 September 1917. (Ref. 1)

Pandit Shivkar Bapuji Talpade was married to Smt. Laxmi Bai. They were blessed with two sons and one daughter. Elder son Moreswar was working as a health inspector in the Health Dept. of Bombay Municipality while the younger one Vinayaka was a clerk at Bank of Bombay. Daughter’s name was Navubai.

Talpade has written five books in Marathi, Hindi and Gujarati languages. These are

Other works and awards