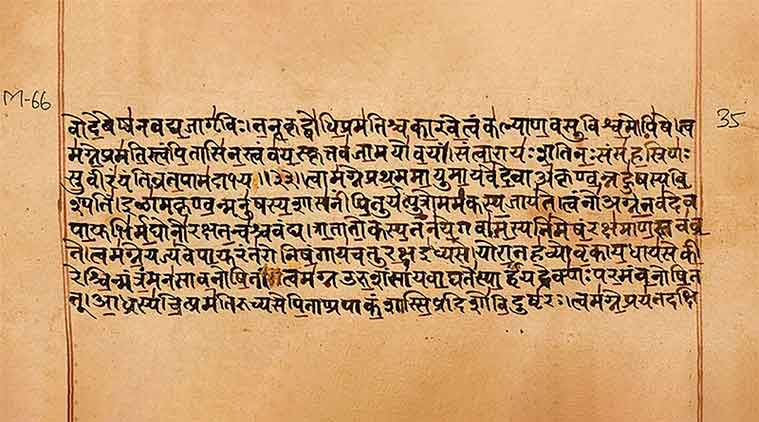 Rigveda manuscript page (Source: Ms Sarah Welch/Wikimedia Commons)INDIA, May 23, 2019 (Indian Express): Students today have it tough. There is an extremely competitive atmosphere, endless hours of lessons and tuitions, and pressure all around. But just imagine the plight of ancient Indian students thousands of years ago. By the end of their education, they were expected to know a set of texts flawlessly, word for word, but there was one hitch. These texts were not written down anywhere. They could not be referred to, they could not be consulted in case of any doubt. For thousands of years, these books existed only in people’s memories! Teachers would recite the verses and students had to learn purely by listening. They had to listen, question, repeat and chant until they got it. To add to the pressure, it was of utmost religious importance that these texts be passed on absolutely unaltered from one generation to the next, not a word changed.

These texts were the most sacred and ancient Hindu texts, the Vedas. Of the four Vedas, the Rigveda, Samaveda, Yajurveda and Atharvaveda, the Rigveda is by far the oldest and consists of about one thousand hymns, made up of about 10,600 verses. The others are typically shorter; the Samaveda has about 1,500 verses, the Atharvaveda has about 6,000 verses and so on. The Vedas were composed somewhere around 2000 BC, but only written down many years later. The process of memorization by listening was called the shruti, which means “what is heard”, and is often used to refer to the Vedas themselves. UNESCO has designated the tradition of the Vedic chant a “Masterpiece of the Oral and Intangible Heritage of Humanity.”

To read more on how this feat of passing on massive amounts of information was accomplished, go to “source” above.