NEW DELHI: Seeking to facilitate Pakistani Hindus wanting to stay back in India for fear of religious persecution back home, the Union home ministry has constituted a taskforce that will monitor and expedite processing of citizenship and long term visa applications for such applicants. The taskforce, to be headed by joint secretary (foreigners) in the home ministry, will start its work in two weeks. “Union home minister Rajnath Singh reviewed matters relating to grant of citizenship that takes a long time for completion of the entire process. This causes hardship and difficulties to applicants, especially to minorities from neighbouring countries who are often of poor economic standing,” a home ministry release said on Friday. Stating that the ministry had received several representations in this regard, it announced approval of a taskforce for speedy disposal of applications from foreign citizens claiming refugee status. READ ALSO: Pak Hindus refuse to return, cite harassmentHome ministry sources said the taskforce will work to grant citizenship to all Pakistani Hindus with complete documents within two months. For those with inadequate documents, long-term visa will be facilitated. 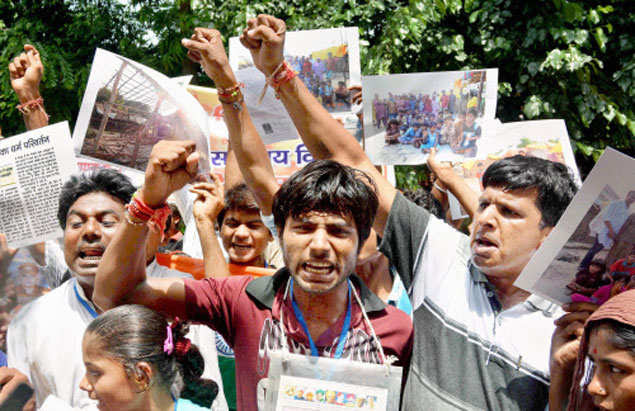 Pakistan Hindus during a protest march to the Pakistan High Commission in New Delhi (PTI Photo)The taskforce will follow up with the state governments on representations regarding pending cases in the states. MHA officials may be sent to coordinate with the state home departments and Foreign Registration Office officials. Since the initial applications are filed online, the taskforce will monitor them and keep track of their progress. READ ALSO: No special provision for citizenship to Hindus from PakistanThe taskforce will also coordinate matters relating to long term visa, which for such refugees may extend to 10-15 years. A foreigner on long term visa is permitted to take up any employment in the private sector or to pursue studies in any academic institution. Most Pakistani nationals belonging to the minority community come to India on a tourist visa only to claim refugee status. Seeking to stay back, they usually apply for citizenship or long term visas. As per data put out by the Union home ministry, 3,753 Pakistani nationals were given long-term visas over 2013 and 2014 (up to June 30) and 1,854 granted citizenship between 2011 and the current year.